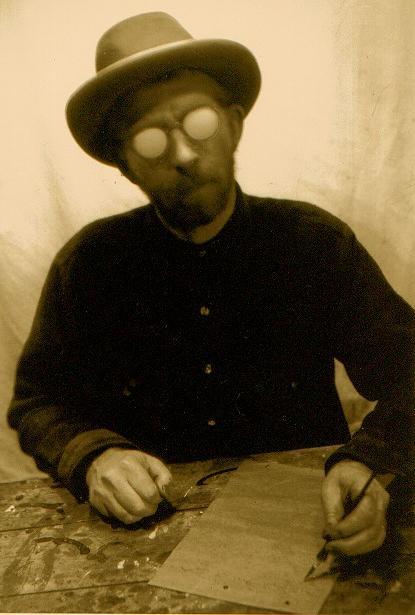 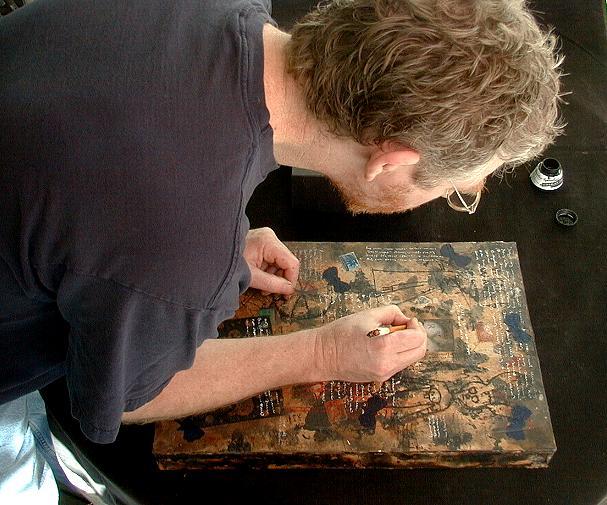 
Larry works with simple materials and objects that present some kind of history: rusted metal, found cloth, or scraps of wood. His typical paint medium is beeswax that he mixes with pigments.  Occasionally he carves his brushes from twigs and often, if an object he wants is not readily available, he will create it.
He experiments with unique surface treatments and since 1995 he is known for the signature look and feel of his dress sculptures with their simple, yet elegant shapes and leathery, tactile surfaces. They are often compared to pioneer or shaker styling and have evoked surprisingly emotional responses.
His most elaborate creations take the form of 'artist's books' - using metal, fabric, twine, paper, paint, drawings, photographs, found objects, and/or sculpted objects made of dirt, wax, clay or wood. Often the subject matter of his art builds on hear-say narratives passed along in the remote logging and farming community where he was raised.

Larry worked in the photo industry and as a b&w photo lab technician before turning to making art full time. He had experimented with home made cameras, altered cameras, altereds negatives and custom print formats and has integrated these photographic works into some of his artist’s books.

Larry is a very prolific artist and has created a vast body of work, that has been shown in mainstream galleries since 1994, beginning with the
MIA GALLERY in Seattle.  (see “sold work”)

The Grover/Thurston Gallery is Larry's current representative in Seattle

Photos: Larry at the Grover/Thurston Gallery,    May 2013

Time&place: my personal history goes back 5 generations in one place. My ancestors crossed the plains and homesteaded in the Harlan Valley, in Oregon,  where I grew up. People in the valley depended on each other and formed a tight knit community. They raised cattle, sheep, farmed and logged trees for a living.

Many stories circulated as spoken history - some mysterious, some tragic, some encouraging, and many remain perplexing. These stories come alive in my art. For the observer they likely remain obscure, but my symbolism transcends and makes the the heart of the narrative emotionally accessible. Collectors from many walks of life respond to my work. There is an underlying meaning that triggers an emotional response.

I developed my own symbols that mark my narratives: for example, the burning house represents change and disruption. Other houses stand for stability and connectedness, a place to be from or to belong. Small houses dot green mountains and each one holds a mystery unseen.
Rabbits and birds that populate my imagery  are interchangeably good and evil, male and female, strong or weak. Appearances can be deceptive.

I am known for my dress sculptures. They appear plain in their countenance but are elegant in their simplicity. They embody the same symbolism but are abstract nature which allows the viewer to supply his/her own interpretation. I have been told of very strong emotional responses to my work.

Looking back to my childhood in the late fifties, life in the valley still seemed like that of pioneer times when a man could hack out a little clearing - as my father did - and with his own hands build a small shelter to raise a family. They survived with a few essentials. Houses were small and the work was honest. People didn’t plan to be rich, they just wanted to survive and be happy.

When you are closer to nature you are more content.
Birds replace radios. Evening sky replaces TV.
In winter the Big Elk River looks like coffee with cream. 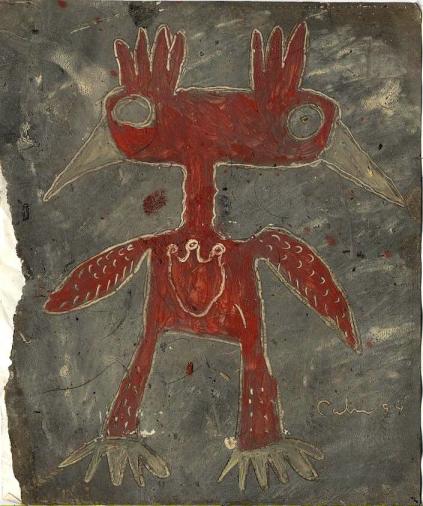 Larry Calkins was born in 1955 in Corvallis, OR, and grew up in a small logging community named Harlan. He stepped into the family tradition of working within logging operations, but after serious injuries in logging accidents, he decided to pursue his obvious talents in the arts. He has lived in London, England, and has traveled widely throughout the US and Europe
.
In the early 80s up until 2003 he worked in photography related fields in Portland, OR and Seattle, WA. In the late 80s he and his wife, a former architect, began building their house near Issaquah, WA, where they have lived for the past 26 years with numerous pets, chickens and 2 mules.
Larry works daily in his studio and in his metal shop -- or in the sometimes sunny, but often wet and cold outdoors. 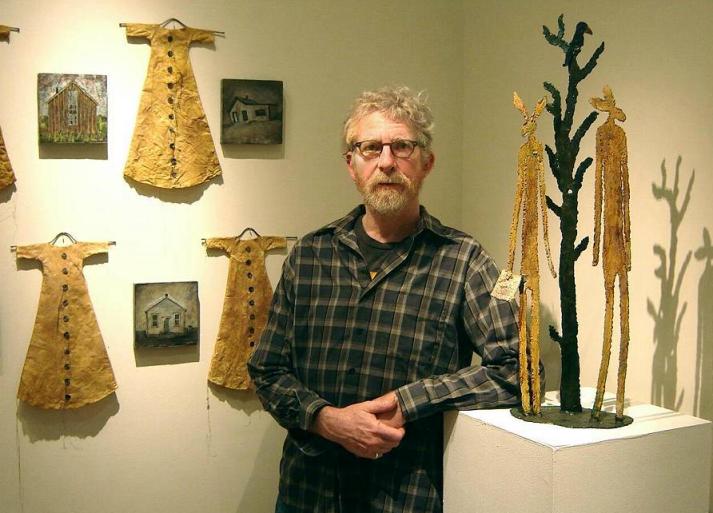 Larry Calkins
Solo show at the well respected Grover/Thurston Gallery in Seattle,
May and June 2013

pictured:
installation of “children of the town”, 20 small dresses and
20 paintings of school buildings (sanctuary stations) 2013
and
“adam and eve” metal sculpture, 2003

Larry working on “entendement of perception”, 2002

Beginning in 2003, Larry Calkins has been Artist in Residence at the Museum of Glass in Tacoma, WA, for several years in a row.
He is also an instructor at Pratt Fine Arts in Seattle and several other teaching venues in the Seattle area, including the Kirkland Arts Center, NW Encaustic in Seattle, Winslow Art Center on Bainbridge Island, artEast, Issaquah, and he has taught Art Workshops in Italy, Hawaii and Sun Valley, Idaho.

Both parents never felt stifled by the isolation of a remote valley. My dad was very practical and my mother loved books and music. Their door was always open to young and old, to  newcomers, and to the long-time residents of this ever changing community. We find that change IS inevitable when logging and farming provides a living.

My artwork is suffused with the world they opened up for me, condensed in a pictorial narrative, sometimes secretive, or humorous, or biting, sometimes dipping into the absurd and surreal undercurrent of a community steeped in personal tragedy - but also in the ever present hilarity of the unbroken human spirit.


It is dusk always in the hills of Harlan. Dusk is the color of waking dreams.

Everything happens at evening-tide. The flying rabbits come out.
The bicycling crows appear. The houses catch fire and the moon glows a baleful yellow.

Dead salmon litter the banks of the Big Elk and all the neighbors lock their dogs away to save them.

Jet trails crisscross the sky.
A little airplane flies over, pulling a banner that says “Remember the lake”. 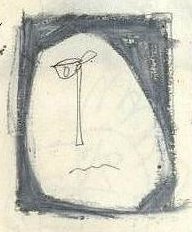 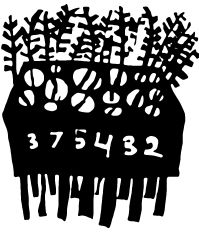